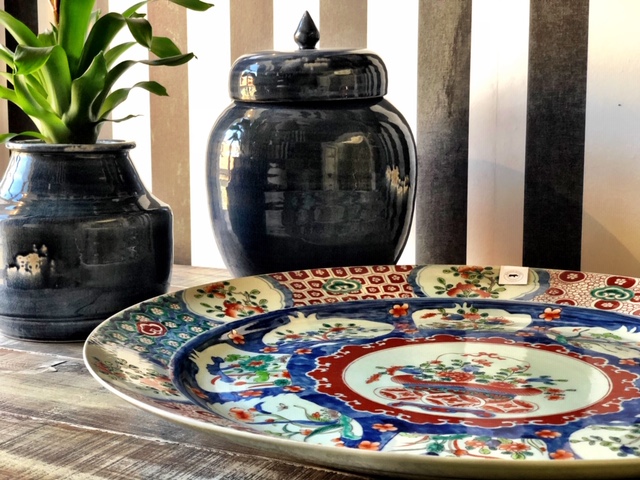 Imari porcelain can be Chinese or European in origin, but was first created in Japan. In the 17th century, the town of Arita became Japan's porcelain production center because it was near Izumiyama, a quarry rich in kaolin clay. The wares were then shipped to the West from the port of Imari, hence the name.Imari featured images of cranes, fish, beautiful women, flowers and gnarled tree branches. These were the most popular images in Japanese textiles at the time. Pieces were under-glazed in blue first, with the blue used to delineate borders and backdrops. Afterward, other colors such as rust red, green, and gold were added and fired at a lower temperature.Imari's iconic color combination proved to be very popular in Europe. English factories such as Royal Crown Derby, Minton, and Worcester produced their own versions of Imari. Other European factories included Chantilly in France, Meissen in Germany, and Holland's Delft factories. Chinese potteries also began to release high-quality Imari pieces for export, which flooded the market and drove up prices for scarcer Japanese Imari.